Dr. Suat Günsel Kyrenia College was opened with a magnificent ceremony with the participation of President Ersin Tatar 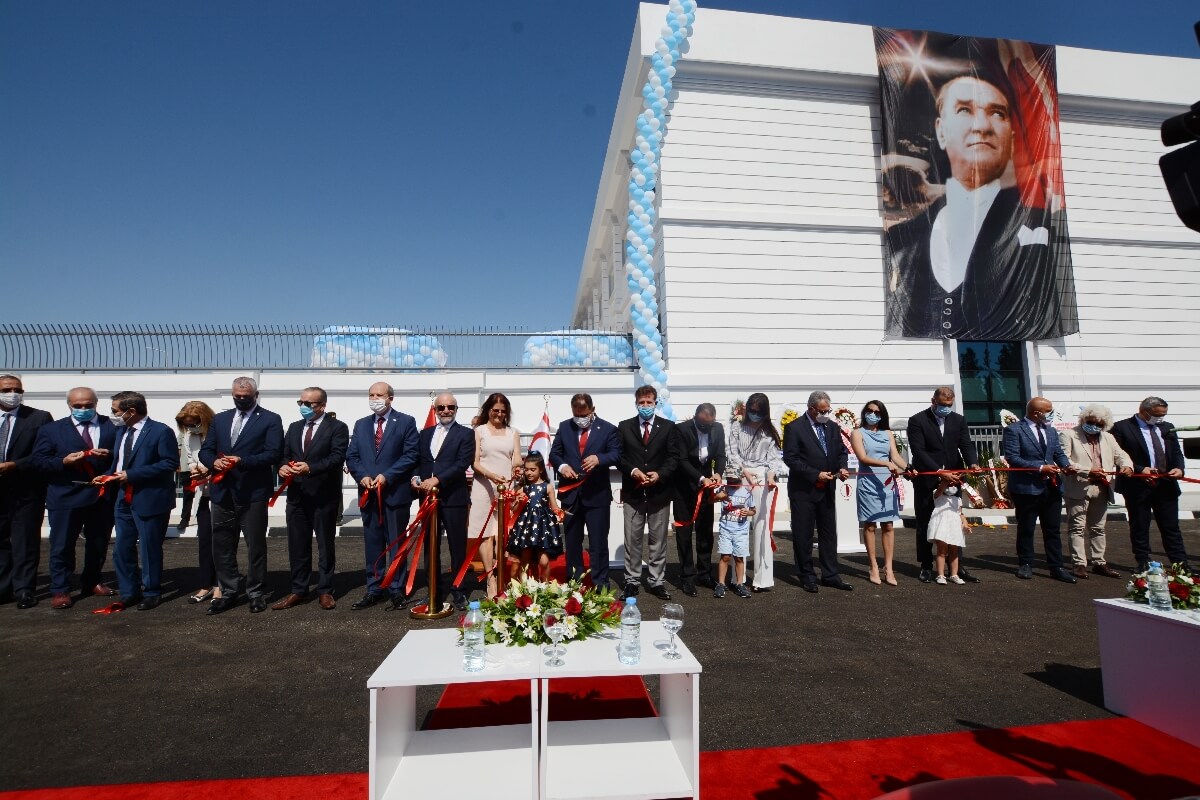 Dr. Suat Günsel Kyrenia College, which will provide extensive education opportunities at nursery, preschool, primary school and college education, opened the doors of a world-class education for the children of the region with its physical features equipped with the latest educational technologies and highly qualified academic staff.

Dr. Suat Günsel Kyrenia College aims to raise world citizens who are academically equipped with bilingual education, French as the third foreign language, science, sports and arts, have a good command of foreign languages, and can think creatively.

At the ceremony hosted by the Günsel Family, the Chairman of the Board of Trustees of the Near East Enterprises, Prof. Dr. İrfan Suat Günsel, Minister of National Education and Culture Olgun Amcaoğlu, Deputy Prime Minister and Minister of Economy Erhan Arıklı, Prime Minister Ersan Saner and President Ersin Tatar each delivered speeches. 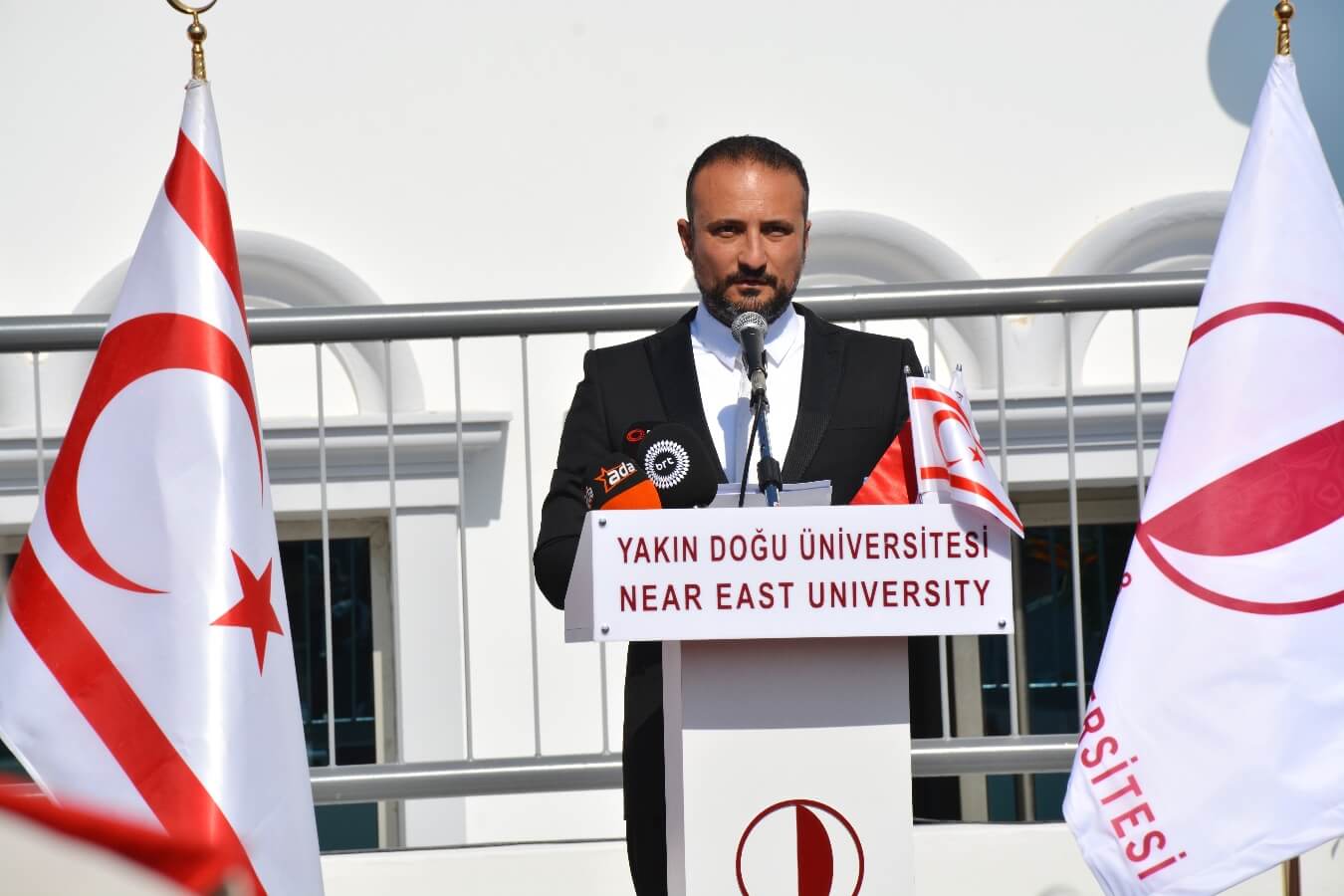 Reminding that the Near East University ranked 30th in the world in the field of education quality in the world universities impact ranking announced by Times Higher Education, one of the international independent higher education rating institutions, last month, Dr. Günsel said, “We see this result as a reflection of our tireless efforts in the field of education for 43 years, spreading around the world. Because, on the one hand, while working to create a deep-rooted educational tradition in our country, on the other hand, we continue to offer the knowledge, science, technology, culture and art produced by our institutions, especially our Near East and Kyrenia Universities, to the service of our people and humanity.”

Prof. Dr. İrfan Suat Günsel also touched on the investments carried out by the Near East Enterprises. Emphasizing that robot technology and information technologies have become the most important sectors of the world in terms of technological development and economic value, Prof. Dr. İrfan Suat Günsel said, “Countries with these technologies provide large economic inputs, and in parallel, they improve their annual growth rates. For this reason, as the Near East family, we crowned our robotic studies, which we started in 2010, as the world champion in the World Robotics Football Championship in 2017, and we continued these efforts without a break.” Stating that they have recently made serious investments in this field by attaching great importance to artificial intelligence studies, Prof. Dr. Günsel said, "We have taken important steps in eliminating the external dependency of both our own organizations and our country in this field by producing our own technology with our artificial intelligence-based respirator developed by our innovation center and our software that we produce through our Near East Technology company using artificial intelligence." Stating that they are continuing to work for the establishment of the Artificial Intelligence and Robotics Institute within the body of Near East University, Prof. Dr. Günsel said, "The works of our Artificial Intelligence and Robotics Institute will ensure that we are in the technologies of the future, and will provide a serious economic power to our country."

"We have worked hard day-and-night to bring our country's domestic and national automobile, GÜNSEL, to world roads," saying Prof. Dr. Günsel, pointed out that with the ongoing second phase investment of GÜNSEL Production Facilities, they will be one step closer to mass production. Stating that the entire machine park of Günsel Plastic, which will produce the products that the country will need along with the parts that GÜNSEL will need, has arrived in TRNC, and that the construction of GÜNSEL Production facilities will start with the completion of the second phase, Prof. Dr. İrfan Suat Günsel said, "With the completion of its installation, we will be opening the first plastic injection factory of our country together with you."

stating that the Dr. Suat Günsel Mosque and the new building of the Cyprus Museum of Modern Arts continue to rise ön the Near East University Campus, Prof. Dr. İrfan Suat Günsel said, "We continue to strengthen the health infrastructure of our country by building a fully equipped medical school hospital on our Yeniboğaziçi campus."

Prof. Dr. Suat Günsel in his speech said, “In the 43-year history of our education life, we did not and will not invest even a single penny outside of our island. Because, as we have guaranteed with our Family Constitution, the true owner of this Enterprise is the Turkish Cypriot Community and each value we produce is a true national heritage of every single person born in our Northern Cyprus. This is why we work so hard, we will continue to work hard. Because we want our society to hold their head up high in these lands. As my father says, " We also want to live on the island like a continental." 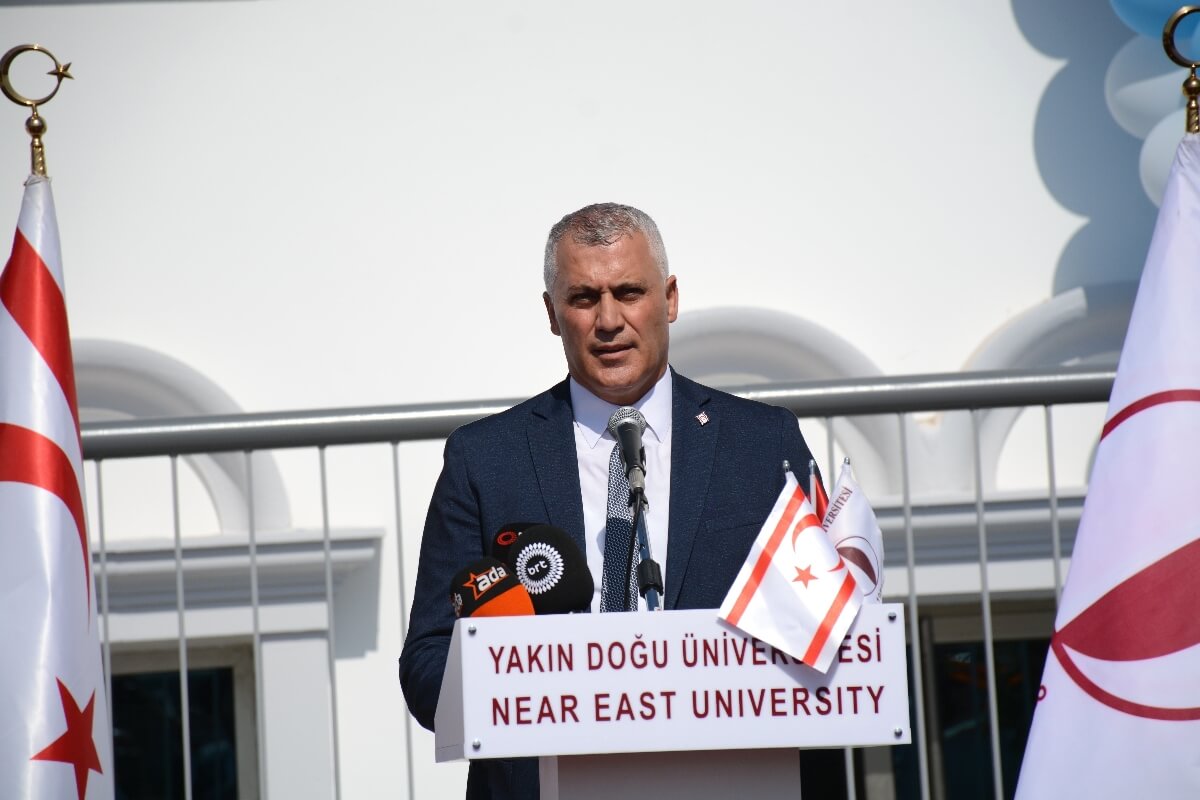 Olgun Amcaoğlu: "The sole basis of owning this country is nothing more than protecting the youth and the future."
Beginning his speech with the words "I am one of those who know how important this investment made in Kyrenia is for the future of the country's youth", Minister of National Education and Culture Olgun Amcaoğlu said, "I express my deepest gratitude to GUNSEL family for their unique contributions to the people of the country."

Reminding that only 1 school has been opened in Northern Cyprus in the last 10 years, Olgun Amcaoğlu said that the number of schools opened and founded this year has reached 14 with the public schools and Near East Colleges built by Günsel Family within the scope of "6 primary school projects in 6 districts".

"The sole basis of protecting this country is nothing more than protecting the youth and the future," said Amcaoğlu and continued his speech; "We will continue to work, knowing the importance of a single day, a single hour and even a single second, to raise young people who protect this country." 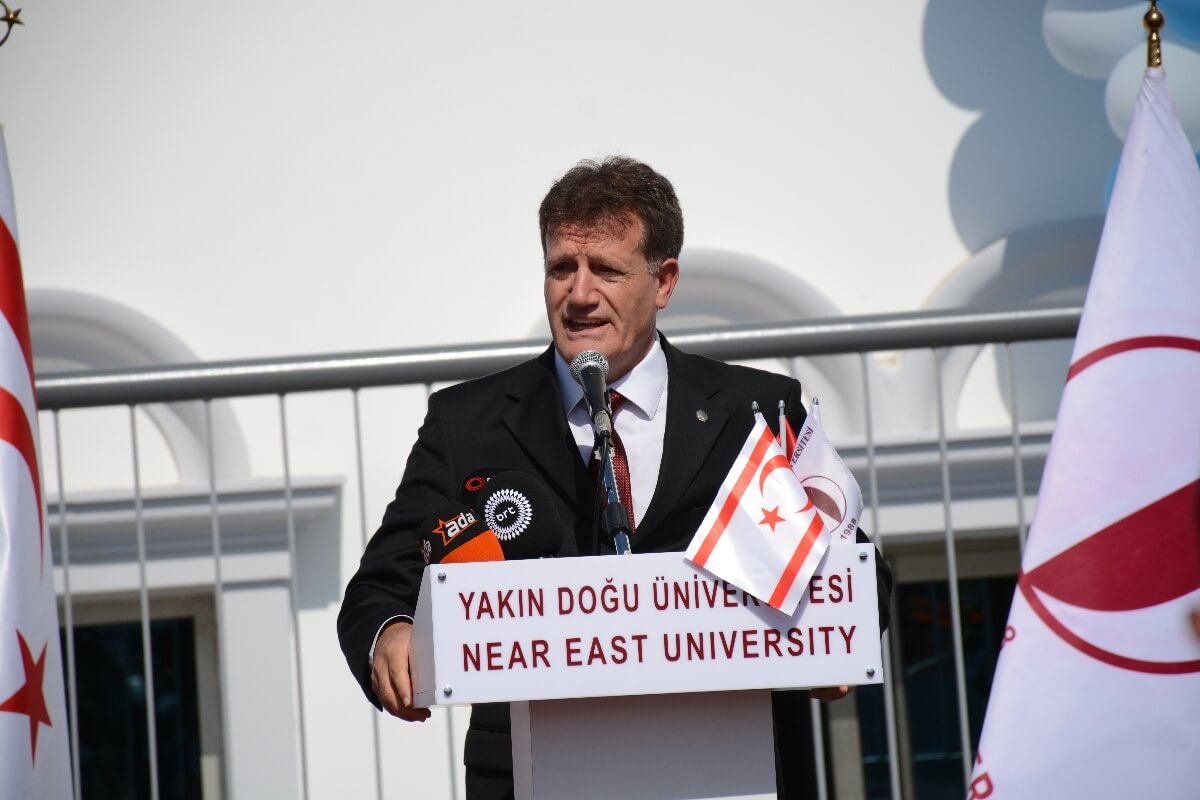 Erhan Arıklı: "Günsel Family is a family identified with the word" wisdom..."
In his speech, Deputy Prime Minister and Minister of Economy Erhan Arıklı said "TRNC now has to struggle to survive in this period when the 2-state policy is in force and education is more important than anything" and stated that the investments made by the Near East Enterprises in the field of education should be an example.

"Günsel Family is a family identified with the word "Wisdom", the meaning of the word WISDOM is synonymous with reading, understanding and culture. With this name passed from grandfather to son from son to grandchild, Suat Günsel and his family really wrote an epic.” Arıklı ended his speech by thanking the Günsel Family for their contributions to the country. 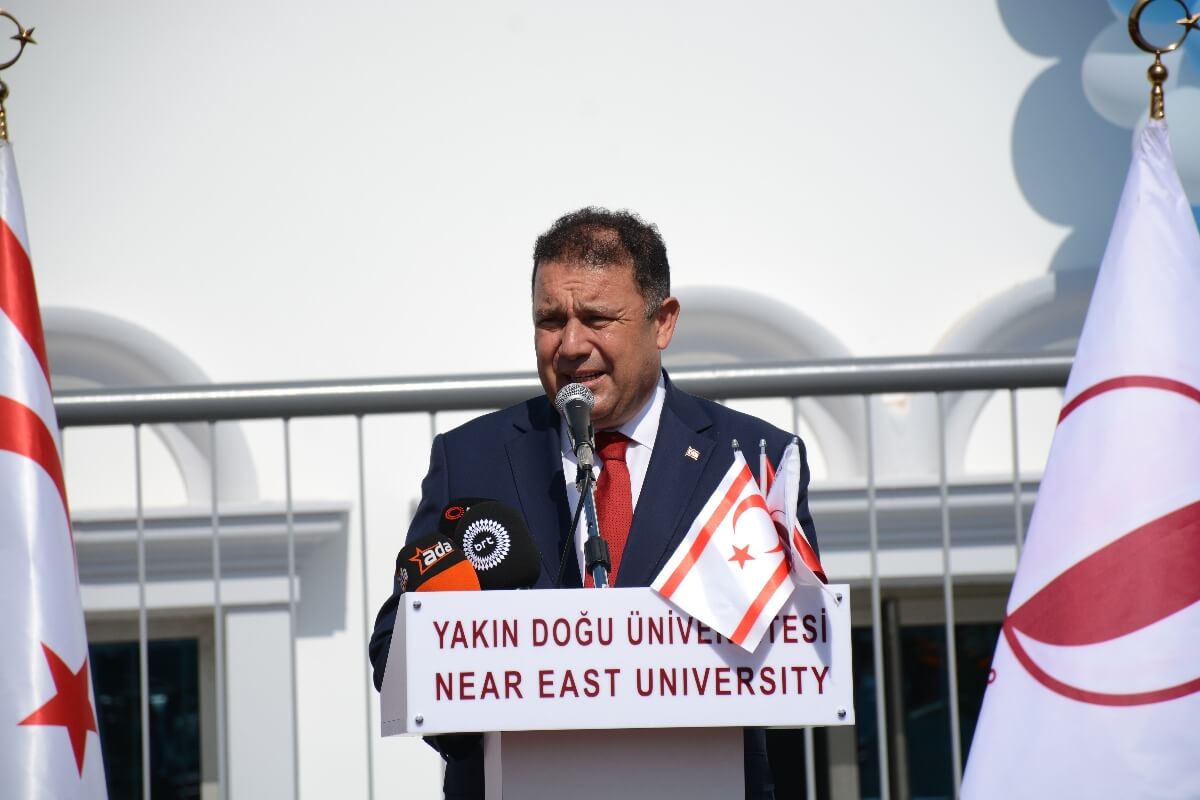 Ersan Saner: "The investments made by the Günsel Family are the values made with the belief that a family who loves their country and contributes to their country was born and added value to the lands they live in"
Prime Minister Ersan Saner, who started his speech by greeting the guests, said, “The state alone may not always be able to do everything. When some investments are supported by the private sector, the sense of taste and pleasure gained from this is incredible, like the fruit of a tree. Here we are experiencing such a special day."

Stating that the Günsel Family pioneered the country by making investments not only in the field of education, but also in many other fields, Prime Minister Saner said, “These are not coincidences. They are the values made with the belief that he loves his country, contributes to his country and adds value to the land where he was born and lived. In this context, as the Prime Minister of the country, I would like to thank Dr. Suat Günsel and his family.”

Prime Minister Ersan Saner, referring to the investments made by the Near East Enterprises in the fields of culture and arts as well as education, said, “Wherever you see a sculpture, you visit a Günsel establishment there. Such a symbol was created in the TRNC.” Reminding that the Günsel Family has made significant investments in the country in many fields ranging from museums to education, finance to automotive, technology to industry, Prime Minister Saner said, "Here, I care very much about the value that the private sector adds to the country and the earnings that our country benefits from it." Prime Minister Ersan Saner said, “I sincerely thank teacher Prof. Dr. Suat Günsel and his family for all the education units that we opened today, starting from kindergarten to college. I also specially thank them for their primary school donations to our state.” 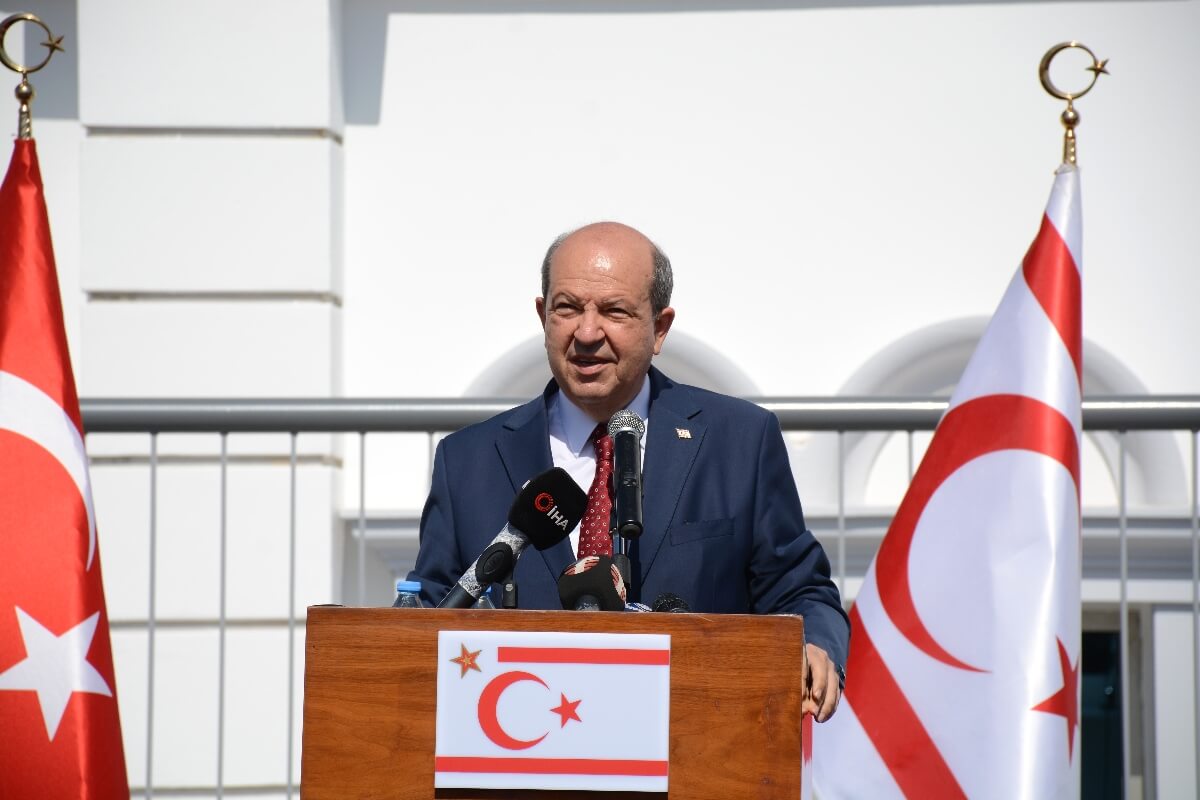 Saying that there are many Turkish Cypriots in England, Australia and Canada, President Tatar continued as follows, “The question on the mind of some of these people is which schools their children will go to. However, I know that many of our people are thinking of coming to the TRNC from their places and settling down. Do not think about it, come back, the top quality schools where your children you want to go in abroad are also here. There is a better opportunity here than those in Australia.”

In his speech, he said, “Let us not deviate from the main goal while setting the agenda, do not waste our energy in vain, very good things have happened in this country and will continue to happen. Because in this precious corner of the Eastern Mediterranean, an extraordinarily important vision has been formed in the development and formation of stability, trust and politics accordingly, which we could not have predicted 10-15 years ago". President Tatar said that this vision is based on equality forever and adhering to our sovereignty. President Tatar said that the settlement of a two-state solution with the support of Turkey at the center of the discussions on the future of Cyprus is a harbinger of a great transformation.

Referring to the debates on the future of Cyprus, President Ersin Tatar said, "The messages given by Turkish President Recep Tayyip Erdogan at the opening held in Tepebaşı on Saturday were very important. With this project, we will see that Anatolian water will flow to Morphou and Meseria in the near future. We will continue to invest. We regard the issue from its political dimension. We started this in Geneva and told that we are a sovereign state and people in the world. If there is to be an agreement in Cyprus, it is our most important duty to cry out our sovereignty to the world and to struggle for its acceptance."

President Tatar concluded his words with the words "I would like to express my gratitude to the Günsel Family, which has made great investments that will strengthen the presence of the Turkish Cypriot Community in this country, and to every member of the Near East Enterprises, from its engineer to its architect, from lecturers to professional staff." 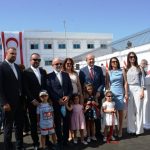 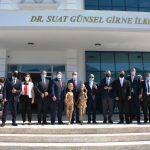 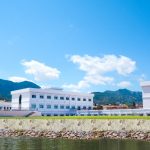